To me that’s something that’s really important. I think the level of happiness that a culture has is really the true measure of it’s success. That’s not about averages, the average human being having a smile on his or her face, it’s about a level of happiness for all, that transcends any kind of socio-economic groupings.

Right lets get you in the mood…

This Monk is on Drugs

A few years ago, here in London the recession bit in really hard. Very well-off people I knew were selling their homes, shutting down their businesses and generally feeling pretty miserable. Talk about anxiety and desperation!  I was convinced that the media had a massive part to play in this recession that quickly became a depression. Day, after day the buzz-phrase meme here on the TV and on the newspapers evolved quickly from ‘the credit crunch’ to ‘Doom and Gloom’ a phrase you couldn’t move for seeing everywhere. Everyday Brits where quite simply doomed and feeling extremely gloomy about it. It’s never a smart idea to link your self worth, and level of happiness with economic forces. Do that, and a handful of crooked bankers could crash your inner contentedness faster than a titanic collision with a Northern Rock. The world’s economic forces are way beyond your control, but the good news is that your happiness isn’t. As my work reflects or questions what’s going on in mass culture, this infuriatingly depressing ‘Doom and Gloom’ rhetoric became something that I felt compelled to make something out of. I just didn’t know what to do about it. On one hand I could describe it in a painting or something, but that would just be adding more negativity to a already way too pessimistic situation.

Anyway, there’s something that psychologists at Yale are getting their heads around, the simple fact that happiness is not dictated by the external conditions. Let me put that more simply, what your outside world looks like doesn’t effect what your inside world feels like. We all know miserable gits with bucket loads of cash, loving girlfriends or boyfriends, decent enough homes and enviable lifestyles, who do nothing but bang on about something or other. I’m sure we also know people who have very little and go around like rays of sunshine, they have an inner happiness that just seems to radiate.

Now here’s the clincher, and I don’t want to get all metaphysical on you, I’ll leave that to Anthony Robbins or those guys that wrote the Secret. BUT, the happier you are the better your outside world starts to become. In essence happier people are more productive, they make better quality decisions, and they essentially do better in life. Now the UN understand that, and today is the day where the world focuses on the simple power of happiness. The first ever International Day of Happiness was in 2012 and I was extremely confused to be given a Happiness Hero medal at the House of Lords, alongside some truly inspirational people. I’m not sure what I did really deserved it, I’m certainly not a unicorn!  but I want to share that with you today because it seems whatever I did, perhaps for a moment did in fact make some people happy.

So one night I was looking at the Pink Floyd album cover Animals, you know the one, the one where they flew giant flying pigs over Battersea Power Station?… and I started to think how much the Tate Modern was like Battersea, and how awesome it would be if an artist flew something, something totally out of place, that had no other intention  than to make as many people as possible smile. So that was it. Mission time!  I just had this eureka thing happen. It was such a cliche it even happened in the bath.  Why not somehow make smiling faced clouds look like they came out of the Tate and fly towards the financial district?

So that was it, literally a few days later, in a moment of brave madness, at the height of the recession on a very dull and grey morning, I released thousands of Happy Clouds from outside Tate Modern and they floated towards the financial district. I wanted to show that art has a capacity to uplift a situation, and that creativity in these times was important. I was really hoping to hack the media for the day and get images of smiling clouds in the paper rather than the ‘Doom and Gloom’ narrative. Essentially to get a symbol of happiness in front of as many people as possible. You know, the whole media is the message thing.

To my surprise, the wind and technology was on our side and we had almost perfect pink soap, helium and vegetable dye smiling clouds flying over millennium bridge towards the financial district. The reaction of those that saw them was like nothing I expected. Screw face business people hustling over the bridge, literally melted when these huge smiling, fluffy wonders sailed past them on their way to work.

And the video we made went totally viral with nearly 100,000 views in next to no time. The media seemed to love it too, and we managed to get the clouds in the telegraph, the sun, the times and several others. Okay, granted the next day everyone was back to their credit-crunch lunch and the impact was as fleeting as the clouds themselves. It was so much fun, and surprisingly it touched enough people for the happiness spreading project to continue. So far HappyCloud has been performed in Moscow, Dublin, Milan and even the Blue Peter Garden! 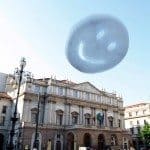 Happy Cloud for Moscow night at the Museum

So on this day of Happiness I’m sharing the clouds again in the hope they put some smiles on some faces.

Breathe in… You’re alive! Breathe out… You’re alive. If you can think of anything more powerful that that to feel huge happiness and gratitude for I w nt to know in the comments box below, and in the meantime please don’t worry! Be happy!

If you are interested in finding out how to create more happiness around you, check out