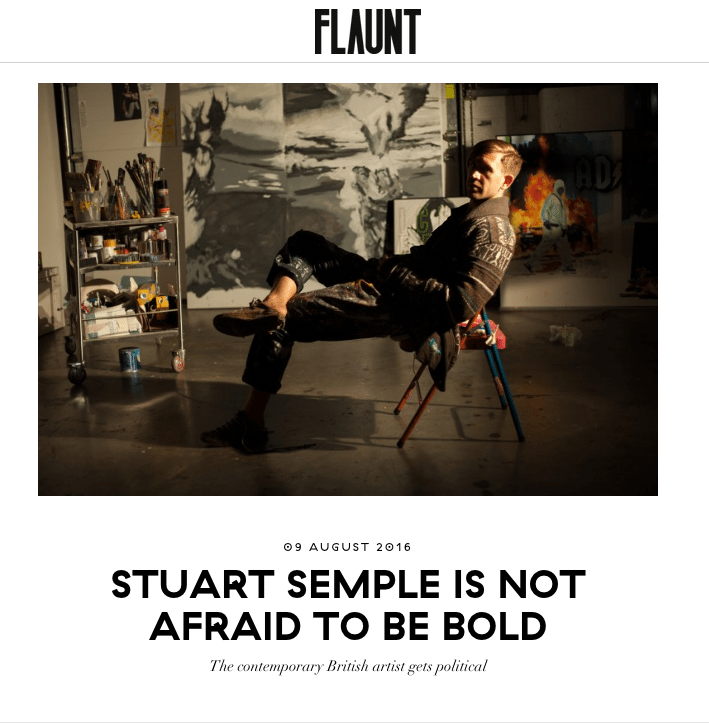 Stuart Semple’s style is bold and unapologetic. The Dorset native is known for his large-scale canvases that incorporate thought provoking text and found imagery atop a contemporary pop art aesthetic. His work captures the impact of pop culture on the individual and the millennial generation’s spiritual and emotional disconnect from the “real experience of living.” Though he may not be out to change minds, Semple is not afraid to let his art speak for itself: known for his criticism of the age of technology and for the political connotations of his work.

We caught up with Semple about his thoughts on politics in art:

How would you describe your aesthetic?

I don’t know if I can really. I struggle to describe visual things with words—it’s a mixture of what I’ve seen and what I’ve been through. Hopefully imperfect: a mixture of control and abandon—something tense, not pretty, a bit annoying, labored, and lazy.

Why have you chosen to integrate “the millennial generation” into your artwork?

Well I was born in the early 80s and came of age in late 90s so I guess I am a millennial. I think my generation is quite unlike any other that has come before or since. The marketing machine of the 80s really spoon-fed us a lot of junk and we were the lab rats for a lot of technology—we’ve made massive compromises with our privacy. I think we are probably the most anxious generation yet. I guess it was very natural for my work to come out of that culture.

Would you describe yourself as a political artist?

As a human, I am deeply political—as an artist perhaps less so. I’d like to think art might be able to go beyond politics and cut deeper into the feeling or experience of being here now. Personally, I’m right there trying to do what I can to help with the changes I think are important. I’m an ambassador for Mind and I’ll do anything to raise awareness or funds for mental health—I’ll be the first person to get up and fight for human rights. That doesn’t mean I use my art for that.

What for you is the ultimate purpose of art?

I have no idea what the ultimate purpose of art is. I think the lovely thing about art is that it doesn’t have a purpose. Art can get away with being totally useless. Art is free—it adds richness to lived experience; it can be the icing on the cake without having to save any lives or the world. It can get lost and it can fail beautifully—it can be pathetic and that’s why I love it.

How is the information age re-shaping the landscape of artistic expression?

It already has re-shaped it—half the population is taking photos with Pokémon in them! No seriously, the amount of information and the tools available to curate and manipulate that information—it’s great because you have access to all this inspiration and you can build upon what’s happening almost instantaneously. The problem is the information age is so unbelievably disconnected from the real experience of living.

What originally attracted you to incorporate elements of fashion, pop culture and media trends into your art?

To be honest, I grew up in a very small seaside town and I was starved of a lot of art—fashion mags, album art, and the media were pretty much the only things that I could get my hands on. On one hand I was critical of them, but at the same time they were such an exciting luxury.

Do you think your childhood or early experiences led you to experiment more into the creative/ art world?

Yes I think so; only because I was a bit of a loner and drawing came really naturally. When I was eight, I saw Van Gogh’s “Sunflowers” at the National Gallery of Art and it just blew my mind. After that I was obsessed; all I wanted to do was be an artist and make art. It was insatiable and it never stopped.

What would you say are your favorite mediums to work with?

Paint, just paint—and maybe charcoal. Pushing pigment around on a surface; preferably canvas. I like canvas because it’s cruel, it’s rough and it takes effort. I like paint because it’s got that huge history behind it and that’s lovely. It’s a really rubbish medium; it’s so limited and everything you do—it’s runny and sloppy. If you were going to waste your life doing anything, painting pictures would be as bad an idea as anything else.

What project would you say you are most proud of?

I’m not. I’m just not. There are bits of certain things that I quite like—but most of the time, I feel more a sense of relief that somehow I managed to get away with it again and can get the chance to make something else. It always feels like pulling something off by the skin of my teeth. My last show, which was at Fabien Castanier in LA, came out all right though.

Do you think your art serves as a warning or a reality check to the young people of today?

I hope I’m not coming off like I’m trying to be preachy or a teacher; I’m just laying it out from my perspective. But at the same time, I’m not scared to say it with my work. My opinions are in my work, but that’s not to say that I think my work can actually change anything. I’d hate to think that what I made changed people’s minds; that’s really not my responsibility.

What are you currently working on?

A few bits—I’m more in a stage of playing, really. I’m going to do a series of public art interventions throughout England and Scotland at the end of the summer and I’m making some sculptures. I was working on a drawing of Hiroshima today for the Peace One Day project that Jake Chapman is curating. It’s nice; I’ve been painting in the garden.